Iraqi woman had 80 women raped, recruited and then suicided

by correspondents in Baghdad

Published Wednesday February 4, 2009
from the Australian

A woman suspected of recruiting more than 80 female suicide bombers has confessed to organising their rapes so she could later convince them that martyrdom was the only way to escape the shame. 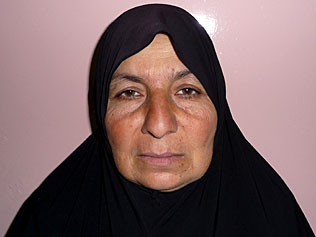 Samira Jassam, 51, was arrested by Iraqi police and confessed to recruiting the women and orchestrating dozens of attacks.

In a video confession, she explained how she had mentally prepared the women for martyrdom operations, passed them on to terrorists who provided explosives, and then took the bombers to their targets.

"We arrested Samira Jassim, known as 'Um al-Mumenin', the mother of the believers, who was responsible for recruiting 80 women'', Major General Qassim Atta said.

"She confessed her responsibility for these actions, and she confirmed that 28 attempts had been made in one of the terrorists' strongholds,'' he said.

Samira Jassim was arrested on January 21. She is allegedly linked to the Ansar al-Sunnah insurgent group.

Two of the attacks for which Samira Jassim admitted responsibility in the video confession took place in Diyala province, in central Iraq, which is considered one of the most dangerous areas of the country.

The Associated Press reports US military figures indicate at least 36 female suicide bombers attempted or carried out 32 attacks last year. Women are often allowed through military checkpoints without being searched, making it easier for them to hide explosives under their traditional robes.

Good one, Paul! But, I fear our Muslim friend Aqeel has been silenced, or perhaps he"s just taking these comments to heart, and is actually busy planning a huge demonstration in Sydney. Yes, a gigantic demonstration against fascist Islamic ideologies, manipulative clerics inciting the young and ignorant to random violence and terror, against madrass hate schools and the criminal manipulation and concerted indoctrination of children for the purpose and solicitation of violence, killing and warfare, the stoning of raped women and the systematic repression of women"s rights in general in the Islamic world, harsh and inhuman punishments, Islamic imperialism, terrorism of Muslim and non-Muslim as a manifestation of Islam, and the simple excommunication of all Muslims to maim and kill in the name of Allah! Yes, I’m quite certain that’s what he’s busy preparing…

Thank you Paul2-- I don"t hate anyone but I will resist with all my resources the hideous ideology you have so roundly and well described.

Bravo paul2, you have so eloquently stated my own thoughts and feelings, far better than I could.

Sorry Aqeel, the line that anyone committing acts forbidden by some Koranic verses is therefore not a Muslim, is unacceptable. Firstly, there is always a contradictory verse to any one selected plus the hadiths and secondly, the concept of takkiya - religion sanctioned lying provided inner intentions are unchanged - makes almost any discussion with a Mohammedan a waste of time. Further, if Mohammedans fail to bring their religion out of the seventh century and all scholars issue edicts forbidding hatred of non-Mohammedans, wife beating, "honour" killing (some honour!), terrorism in the name of Islam, the restablishment of the caliphate, the imposition of Shari"a and a clear statement that supremicism and jihad have no place in the modern world, all Mohammedans are at war with the world. Dar-el-Islam is at war within itself and at war with us, the dar-el-harb and with modernity. Words of peace and reason cannot be accepted when the vast majority of the 1.5 billion Mohammedans either voice support for butchery to the cries of Allahu Akhbar or remain silent and while the Organisation of Islamic Nations spews hate and the eternal cries of Muslims under attack when victims of jihadis defend themselves. If you and others cannot speak out against the barbarities of Islam in free societies like Australia, I would respectfully submit that you and they are unfit to remain in liberal democracies; the Iraq of Samira Jassam is more suited to such mind-sets. And don"t come back with accusations of hate - I write in anger at the suffering and hate Mohammedans spread in the name of their religion, but also in sorrow for the suffering Mohammedans impose on their own.

PS The woman in photo is dead. You can see it in her eyes. Her death started when she was born female in a woman-hating world. Possibly her mother and aunts held her down while mutilating her most sensitive body part -- the clitoris. Then, born into slavery, castrated and sold off to become the property of a male, her spirit dead, what else can she do except help destroy other women in the same way? Those who were destroyed continue to destroy.

As to Islam "forbidding rape" what nonsense! Mohammad himself raped the women of the men he"d just slaughtered. Safiya had just witnessed the murders of her husband, father and brother. Is that some kind of Islamic foreplay?

Brian, exactly. Why aren"t so called "moderate" Muslims screaming in outrage? There are three answers, none of them pretty. 1. They agree with the actions of the mass murderers. 2. They"re too scared of their "brothers" to speak up. 3. They just don"t care because they"re so brutalised by Islam that they hardly notice. Once charming Western "revert" to Islam said how sad she felt that she couldn"t slaughter animals in AUstralia in the right way for Ramadan. SOmeone who feels "sad" at "not slaughtering animals" is severely distorted. Taking any life, even an animal"s, is a serious business and must be done with compassion.

Aqeel, regardless of your ad hominems toward me, I think you should re-read the un-named insert below, starting, "If Islam forbids killing...She"s asking you, "if all these despicable things we see and read about are against Islamic law, why aren"t imams throughout the world, and particularly in Gaza, Iraq, Iran, Yemen, Sudan, Afganistan, Syria, Lebanon, etc. standing at their pupits decrying as loathsome, vulgar, despicable and UN-Islamic, the various activities like this woman"s? Why aren"t they screaming their outrage at the indoctrination of children to strap bombs on their little bodies, or carry guns to blow up and maim Jews and other persons unknown to them? Why aren"t they calling Hamas infidels and UN-Islamic for throwing living Muslim Palestinians (not Jewish!) off 50 foot walls and buildings, with hands tied, falling to their deaths? Why is the entire Islamic community not revolting against the radical Islamists who are forcing the entire world to hate and defend themselves against the psychopathia of these many, many millions of Muslims who believe in death, and who believe that Jihad means all are combattants, if they are not Muslim? Why are "moderate Muslims" like yourself afraid of speaking out, writing and demonstrating against the many violent sociopaths who pride themselves in maiming and killing, in the name of Allah? Why are you arguing that these people are not representing the Muslim world, when in fact they are? Why is it so diffiuclt for you to see that their behavior forces the world to hate Muslims, and despise what they stand for?

Saddam was a secularist and nationalist, his system of government could not even be considered anything close to Islamic. In fact if your beard was considered too long in his Iraq his intelligence services would kidnap you and torture you. You could even be killed for it. Regarding the person who declined to leave their name"s comment about why haven"t Muslims condemned suicide bombings and acts like 9/11, are you blind? 9/11 has been condemned by the overwhelming majority of Muslims and Islamic organizations. Perhaps you should get out of your bubble of hate so you can go and research this for yourself. Paul2, I would say that the disgusting acts that she did do in fact take her out of the fold of Islam and are unIslamic. If she dies without repenting on it she"ll be considered non Muslim and even if she repents one would imagine there would be a great deal of hellfire awaiting that disgusting woman. Jake in Jerusalem, do you have any form of evidence that could corroborate your assertion that Hamas rapes the wives of men who work in Israel? Anything at all?

This is disgusting & evil, but unfortunately nothing surprises me any more. And I dont believe for one moment that this monster is an isolated phenomenom. There are probably many more doing the same thing, but havent been caught. "Evil" is something beyond discussion - Informing the international public is essential. I worry this kind of thing produces "copycats".

Unbelievable barbarity. If verified, this info must be circulated to UN officilas and Womens" Rights groups.

It is pleasing that Aqeel has not used the line that such a depraved woman is not a Muslim. More importantly, the article shows us a society where cruelty, fanticism, callousness, sadistic sexism and gross hypocrisy with regard to morality, modesty and religiousity is the norm. This sickening degeneracy occurs from Pakistan to Algiers and we, the dhimmis must not raise our voices to protest against any action that the dwellers of the house of peace take.

None of this is new. Rape is a traditional tactic for brokering power in Iraq, Syria and among so-called Palestinians, to mention a few. Saddam had official rapists; that was their job. See Kanan Makiya"s book "Cruelty and Silence" on Saddam"s regime for more detailed background on this topic. Review at http://www.nytimes.com/1993/06/27/books/makiya-cruelty.html?ex=1233896400&en=d82f07cc27fda00a&ei=5070 In Syria, the local clan would invite the new governor and his wife for dinner and then pack-rape the missus in his presence, making it clear to him who the real rulers in the province will be. Hamas fundamentalists pushed Gazans into the folds of Hamas welfare by forcing the men out of their jobs with Israeli employers. The tactic was simple; rape the missus while the hubby is at work (screaming Allahu Akbar during the act). This was quite persuasive in getting men out of work and onto the Hamas welfare rolls. Hamas then claims to be the main provider for Gazan welfare. When it comes to beastiality in Arab and Islamic societies, I am no longer surprised by anything.

Aqeel, if Islam forbids killing non-combatants, then where are all the imams standing up in the mosques crying out against suicide bombing, for example? Where was the condemnation of 9/11? Silence signifies non-protest, and non-protest means agreement with these acts. Or do you have a different definition of "non-combatant"?

Brian you obviously can't help yourself can you? Islam forbids this type of behavior. In fact the punishment that would be for this disgusting woman would be for her to have the death penalty. Islam forbids rape and forbids killing non combatants.

Within which religion today other than Islam, could one imagine a women covered from head to toe with black garments, indicating her adherence to faith and God, could one imagine such a despicable speculation in human life taking place? To think: a religous woman arranging other womens rapes, to then exploit their public and personal shame to recruit them into murderous acts of terror, as a means of regaining their lost honor? The more we learn, the more we see, the deeper we cut, the more diseased this dark, fearful, festering form of religious pursuit becomes in the eyes of the world. In terms of disgust, I can only think of the You Tube videos I"ve recently seen of Hamas Palestinians throwing their "fellow Muslim Palestinian brothers" 60 feet over a wall, and off buildings, to their deaths, with hands tied behind them with bags over their heads. Somehow, one becomes pressed to imagine how any particular "religion" can groom so many inhuman people.

I"m sending this to Amnesty International. All Human Rights organisations must be apprised of this hideous story.