What happened in Italy last night

Fiamma Nirenstein, a journalist and some-time resident of Jerusalem, is a new Member of the Italian Parliament who is outspoken on Israel's behalf.  She writes below that there is increasing understanding of what Israel is facing in its current war against Hamas. 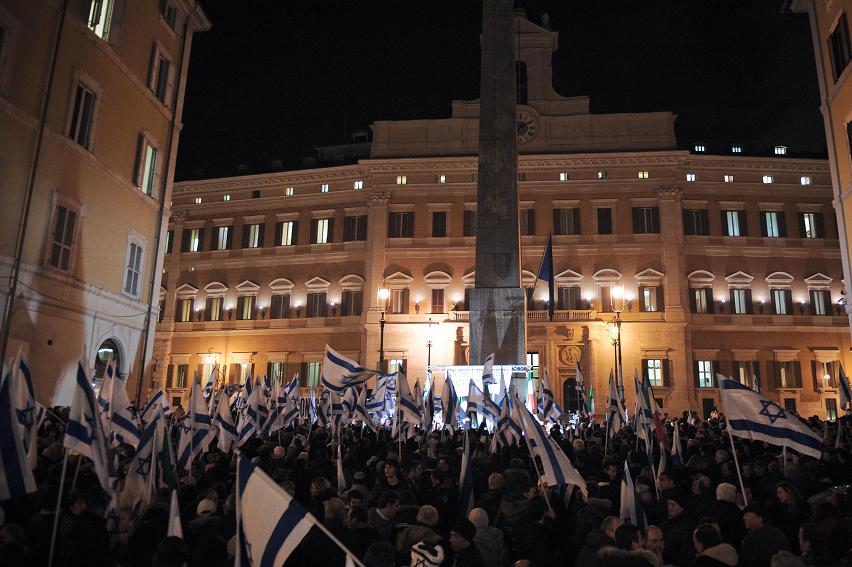 We didn't expect what you see in this picture. This is the square of the Italian Parliament in Rome, Piazza Montecitorio: You can see the Palace on top of the square, and in front a lot of Israeli flags. That was last night from 6,30 to 9,30 pm. What you cannot see here, is the extraordinary numberof members of Parliament, about 100 from all political sides, that took the stage during this time: for about three hours we were speaking about the role of Israel, its right to self defense, its moral height, its fight on behalf of us all, of our civilization and values, against the wild hate of the Islamic jihad represented by Hamas.

It seems to me that for the first time in the too long history of the Arab/Israeli conflict, apart from a minority of crazy leftists and fascists that took the street with anti-Semitic slogans, we have achieved a huge consensus on one critical point: this is not a local conflict, there is nothing in it that reminds us of a peace theme that has characterized the
Palestinian issue. This is an attack against the western world, and Iran is behind it.

The change of attitude is great: the terrorist and religious nature of Hamas and the democratic, civilized nature of Israel are seen face to face for what they really are at least by the European elite at large, dead and wounded notwithstanding, and there rises an identification with Israel against a regime that uses human shields and promises slaughter of Jews in its charter.

What happens today, at least in Italy, is the defeat and fall of the leftist ideologies: ideology that has allowed justification of all the most violent crimes and most disgusting verbal attacks.  If Arafat launched the terrorist
Intifada, if he promoted the martyrdom of children in public speeches, the ideologists were ready to justify him with the issues of occupation, the Palestinian misery and loss of any hope.  Not so with Hamas.

History, in Italy, has brought to a profound crisis the ideology of revolution and the justification of any cruel attack against a so-called unjust imperialist order. That time is over,  nobody will see Hamas as the resolution of the problem and not even as the problem itself. I think that the word "peace" has lost that healing meaning that it once had. The new non-ideological point of view sees that there is no peace when one of the contenders doesn't want it, and that even if the world in the short run asks for a truce, in the long run it hopes for the defeat of Hamas.

Last night, many people, Ministers and Members of Parliament, composed a very new, interesting mix of opinions. I  think that when you are not overwhelmed by exotic thirdworldism, the images of children educated as hate machines, the speeches of jihad leaders, from Ahmadinejad to Nasrallah, to Hanje, that deny the holocaust and promise death to Jewish and Christians alike, you are left only with disgust.  Westerners, thank God, can still be disgusted by uncivilized levels of political speech.  But most of all, in the Parliament square, many of the Parliament Members
said: "I love Israel".

You can't imagine how many.

Well, I know that here in Australia that many thousands of people back Israel, and so does most of the politicians who are in our right winged governments.

Yes, wonderful and warming to the spirit and mind! May more people (and parliaments)be brave and honest enough to come out of the closet and make such a STAND and show of solidarity.

All Europe should take a leaf from Italy.The Italians are showing the world that theyr are siding with Israel against terror Islam and tis hideous ideology. Viva Italy

At last a Parliment that has seen the truth, and spoken out. Hopefully many more nations will follow, including Australia.

This is the first sign for a very long time of an acknowledgement of the Jewish constant struggle in the middle east - No one wants to hear the truth - no one wants to lend an ear to the Israeli - They are in an awkward situation where by they want peace but can not obtain it unless they fight for it physically morally hence this last war - When the so called palestinian commence to realise that ISRAEL IS HERE TO STAY - when they stop their attacks - They will come to realise that you can have Israel as a neighbour who will do much more to help than they will ever do. Italy for once has shown some form of recognition to that fact - For which we JEWS from the diaspora are recognisant of this gesture - BRAVO bella Italia - Elliot Galanti

Oh my gosh Ronit, this is just fantastic, the best news for a long time. Perhaps some parts of the world is waking up at last and seening that tiny little Israel is not the problem afterall. Man have we all fought for so long for this, telling as many people as we could.. I had thought we had totally lost the battle, and was giving up, but this has given me hope that the people are not asleep after all..

Praise HaShem for this. Pity we couldn"t see the same support outside [better inside] the Israeli Government. We can only pray with hope, knowing that the Holy One of Israel has all under control.