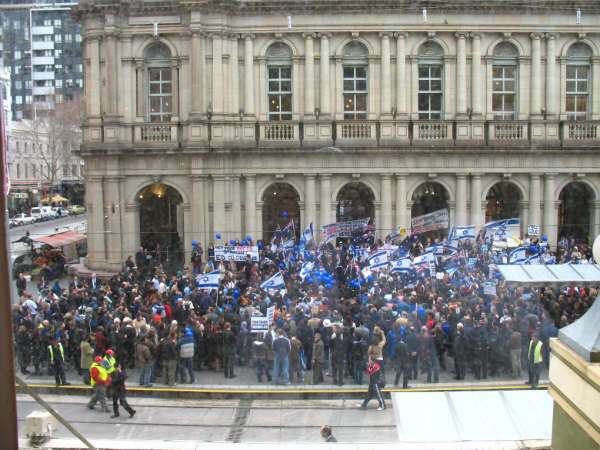 Helen Shardey did not have a prepared speech. She spoke from her heart about the emotion of what all of us were feeling. She opened by thanking everyone for coming to show unity for Israel and for peace.

Ms Shardey pointed out that we all probably woke today with tears in our eyes and heavy hearts for what the families of the young captured soldiers must be enduring, what their Mothers must be going through, and the fact that so many Australians have family who are in danger. Helen then recalled that over 10 years ago just before she became the Member for Caulfield, she was discussing the Middle East with Irwin Lamm. The debate was about whether to support the notion of land for peace. She then asked the question: "The land has been given (in Gaza), where is the peace? Where is the peace? 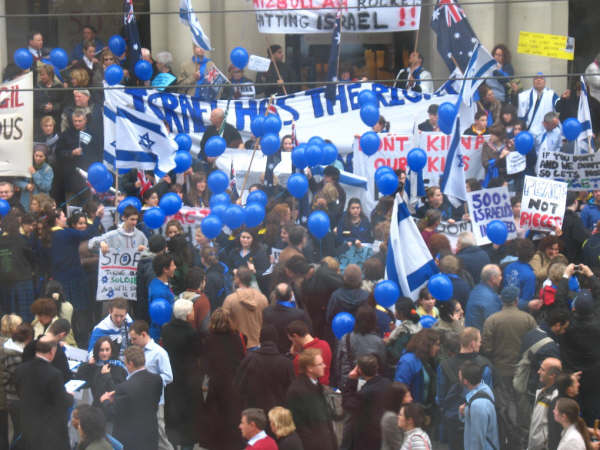 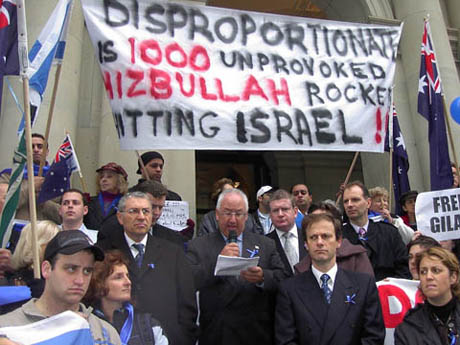 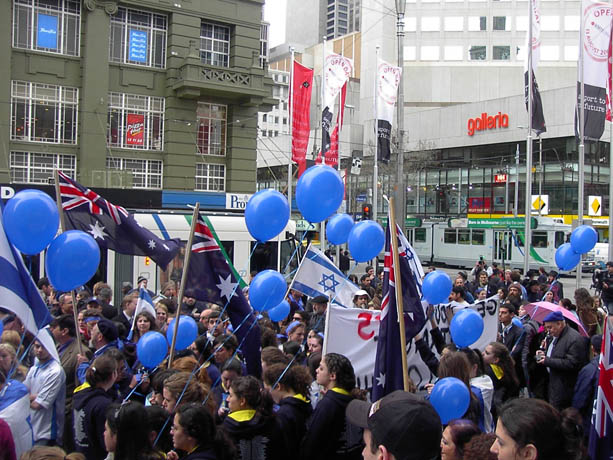 The political leadership of Australia whether it is government or opposition, the people who represent 95% of Australians believe as I believe, that Hizbulla and Hamas are terrorist organisations. People who aid and assist these organisations are liable to proisecution under Australian Law. 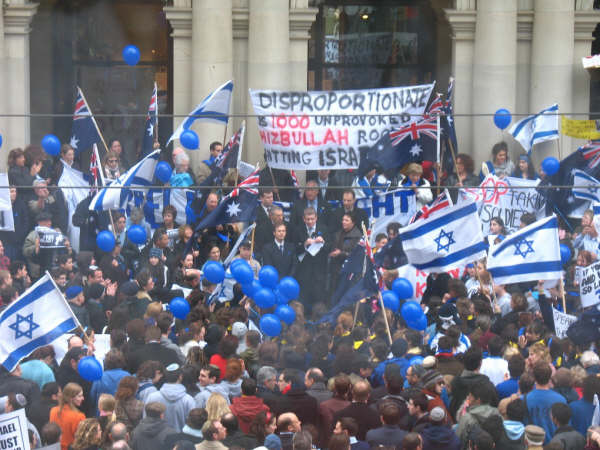 The current conflict began with the Iranian supplied missiles targeting only civilians in Israeli towns and cities. The Israelis enjoy a de facto peace with the government of Lebanon and formal peace with Jordan and Egypt. 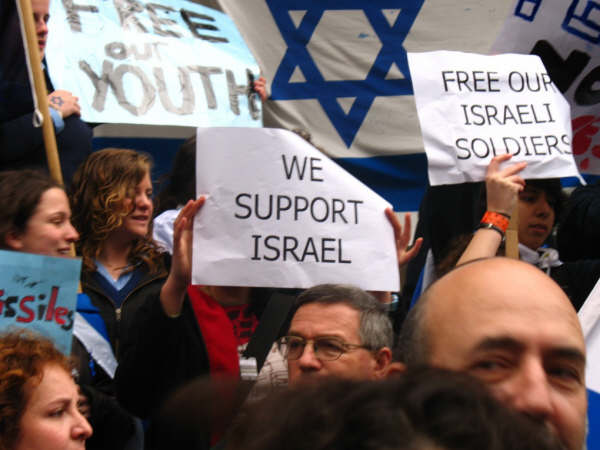 Four years ago the United Nations passed resolution 1559 which called on all parties to respect the border between Israel and Lebanon and for the Lebanese government to disarm the Hezbollah militia. As Kevin Rudd told Sky News, all of this was done in violation of Security Council resolutions adopted over the last two years which have required the government of Lebanon to disarm the Hezbollah militia in the Southern part of that country. 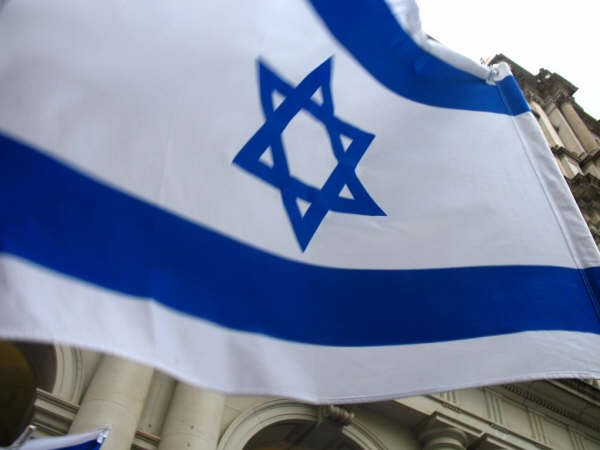 Imagine that the NSW government allowed a group armed with long range rockets to bomb the suburbs of Melbourne from NSW and then protested that Victoria should not respond because they had no control of this armed militia in their territory. That is the equivalent of what the Lebanese government is saying.

In November of last year Israel despite great internal turmoil withdrew unilaterally from Gaza. Since then every day the people of Sderot and Ashkelon have had over 1000 missiles launched at them from Gaza.

It’s crucial that our fellow Australian look beneath the trite lazy equivalence trap that arises from simplistic media reporting of a conflict that began with Hamas and Hezbollah kidnappings and missile attacks. That Israelis have withdrawn from Gaza, they want to unilaterally withdraw form 90% of the West Bank.

Israel is a booming bustling modern democratic technological state. It wants modernity, a future and peace.

The attacks by Hezbollah and Hamas underline what this conflict is about and what Australian’s need to understand it is not about a bunch of vengeful Jews blowing up Lebanon for the sake of it. Hamas/Hezbollah and their sponsors in Iran openly say their aim is to obliterate Israel. They want to destroy the near 6 million Jews of Israel, just as the Nazis did more than 60 years ago.

There is nothing that any government no matter how davish, now matter how accepting of a Palestinian state along side of Israel can do except reject this existential threat.

Finally, let me conclude by saying, it is no coincidence that the Asutralian parliament classifies Hezbollah and Hamas as terrorist organisations. This is not something simply decided by the government. It is done with the full and total support of the opposition.

In other words, and I urge the Australian media present to communicate this to the Australian people, your elected representatives can have arrested charged and jailed any person who belongs to the organisations in Australia that are doing the same to the Israelis as they would do to us.

Kevin Rudd, Kim Beazley, John Howard and Alexander Downer, all grieve at the loss of civilian life. All call for restraint to be exercised to the extent that it can. But let there be no mistake, any defeat for those who would appose their 6th century perversion of one of the world’s great religions on all of us whether it is Sheik Nazralah, Khaled Mashaal, Abu Bakar Bashir in Indonesia, or OBL in his cave somewhere in Wazeristan, is a victory for those of us whether in Australia, Israel or the United State or Indonesia, who want a democratic pluralist future.

We must be very clear that the war against Islamist terror is not a war against Lebanese, Indonesians or Muslims. Indeed, the safety, wellbeing and future of moderate mainstream Islam at the coalface as far as Australia is concerned- in Indonesia, will determine the safety and security of Australians.

So let us understand that Israel’s cause is our cause. Israel’s victory over terrorism is Australia’s victory. The defeat of Hezbollah/Hamas is indivisible from the defeat of Jaamah Islamia or Al Qaida. 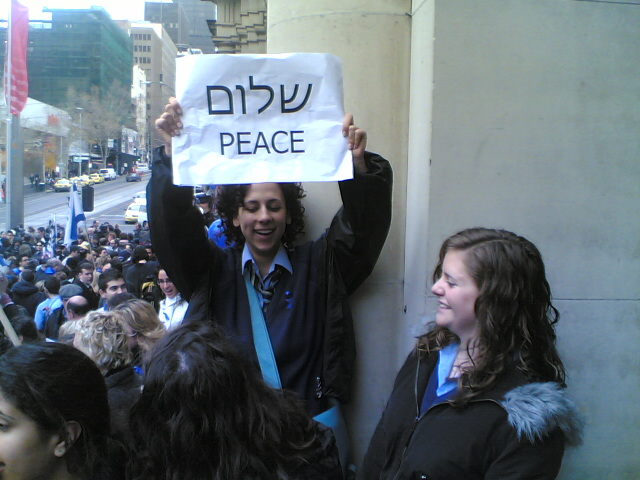 From Gaza in the south and Lebanon to the north, Israel is under attack. Since Wednesday Israel has been attacked by 1,400 missiles. Israel did not provoke these attacks. They come from parties that are called by various names. But we here today know exactly what they are. They are terrorists. They are criminals. And Israel has every right to defend itself against them. 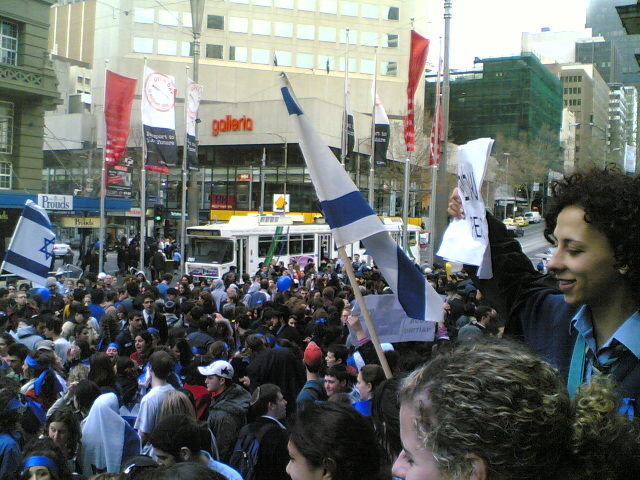 I have to say, there has been insufficient recognition of Israel’s efforts, made in good faith, to further the cause of peace in the Middle East. Despite withdrawing from Lebanon 6 years ago, Hezbollah terrorists from within Lebanon continue to launch aggressive assaults on Israel’s sovereign territory. And despite withdrawing from Gaza last year, Israel continues to come under attack almost daily from rockets fired from Palestinian terrorists linked to Hamas. 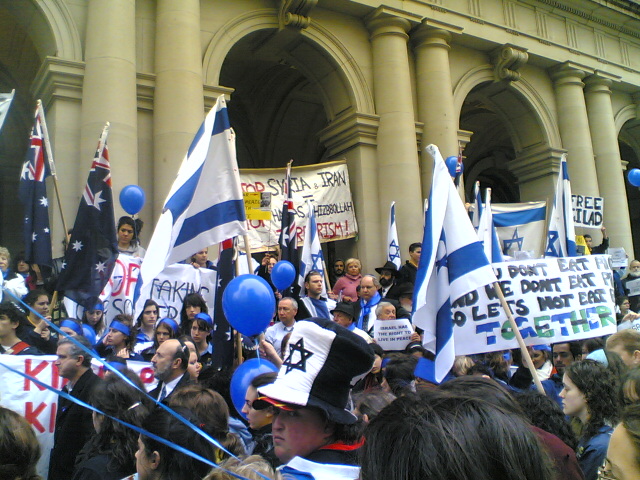 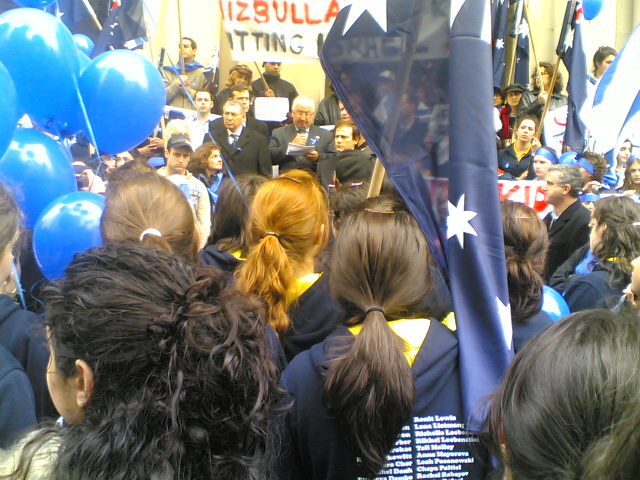 Israel is being attacked from within the boundaries of two territories that claim to be democracies. If the Palestinian Authority and the Government of Lebanon are the true democracies they claim to be, then they will take action to stop the attacks, to stop the abductions. If they are true democracies they will enforce the rule of law within their territories, they will cease to feign an incapacity to act. All that is required of Lebanon and the Palestinian Authority to enforce the rule of law is the will to do so. In conflicts, facts actually do matter. We know the violence in the region commenced with the attacks on Israel by Hamas and Hezbollah. The Government of Israel has a right to defend itself, but more than that, the Government of Israel has an obligation to protect its citizens. To fail to do so would be a dereliction of its duty. Israel’s targeted military response is legitimate.

The Prime Minister wanted me to tell you in clear terms that the Australian Government condemns the taking of hostages for political purposes and calls for Israeli Defence Force hostages to be released unconditionally. The rocket attacks must cease.

We all hope and pray for the speedy resolution of this crisis and the safe return of the captured soldiers. And it is crucial that the international community support Israel’s efforts to recover its citizens and endeavours to resolve the issue. All parties must accept Israel’s right to exist in peace with its neighbours.

Israel is a beacon of hope and liberty in the Middle East. It is a great and robust democracy. The people of Israel are free and will always be free. And the people of Australia will always stand by them.